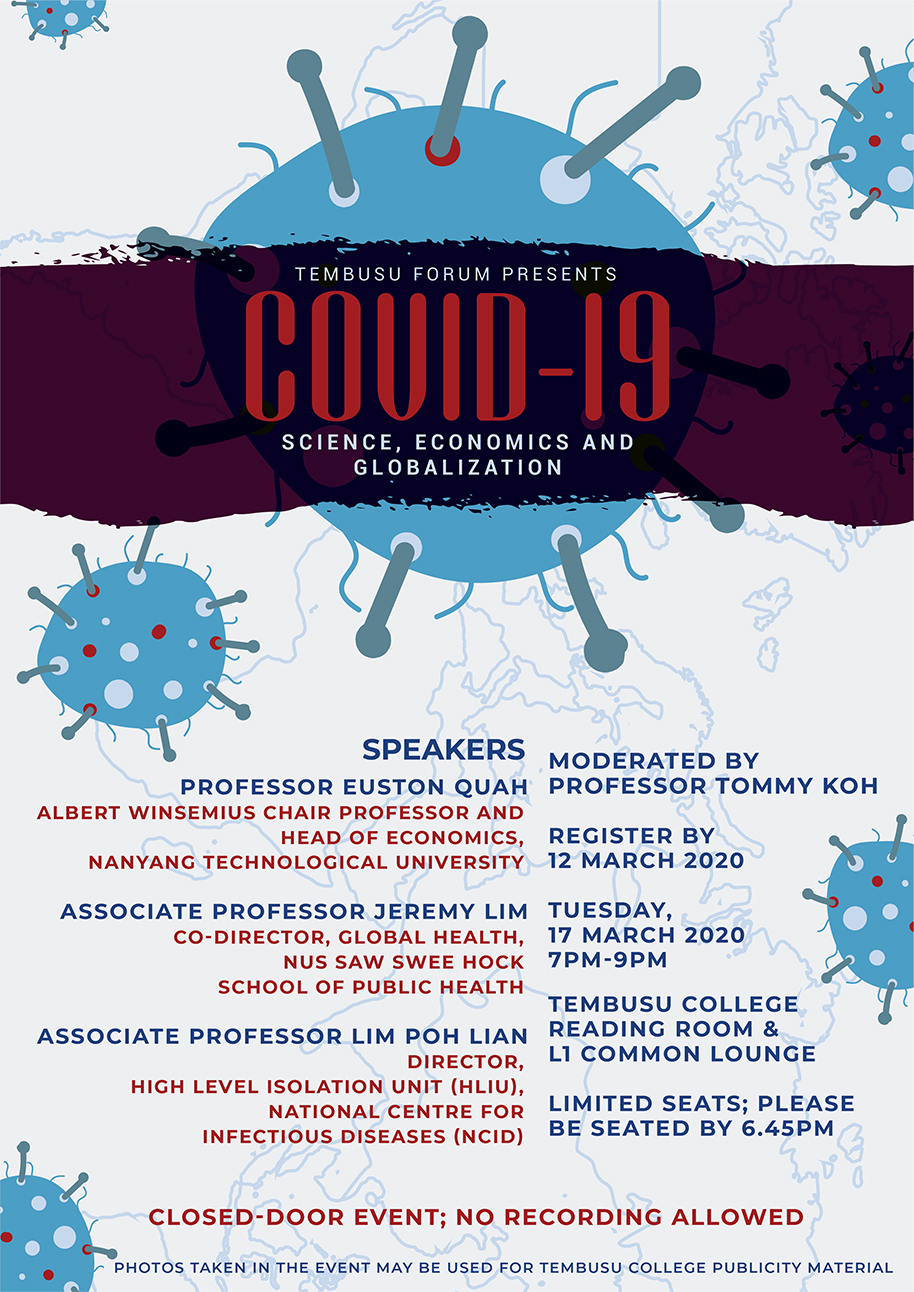 6.50pm:      All to be seated in Tembusu College Reading Room (streamed live to Common Lounge)

Associate Professor Jeremy Lim is the Co-founder and CEO of AMiLi, the first dedicated gut microbiome full service company in Southeast Asia. He is also Co-director of Global Health at the National University of Singapore (NUS) Saw Swee Hock School of Public Health, where he works to enhance cooperation, capacity building and knowledge sharing across the region. Prior to AMiLi, he was the founding partner of global consultancy Oliver Wyman’s Asia health and life sciences practice (2013).

Trained in surgery and public health, A/Prof Lim attained various post-graduate qualifications, including membership in the Royal College of Surgeons (Edinburgh), Masters of Medicine (NUS) and Masters of Public Health (Johns Hopkins, as a Fulbright scholarship awardee). He was an inaugural fellow of the Asia Society A21 young leaders programme in 2006.

A/Prof Lim has a special interest in ways that technology can increase health equity and access to care. He advises a number of health technology companies and programmes in the region and globally. He also serves on the boards of and/or advises various charities and social enterprises, including HealthServe, Dover Park Hospice and SNTC. A/Prof Lim has worked in executive roles in both public and private sectors, including time spent as a senior official in the Ministry of Health, Singapore.

A/Prof Lim is a regular commentator on health issues in the region and in 2013, authored Myth or Magic: The Singapore Healthcare System. He is currently working on a book on health innovation.

For the forum, A/Prof Lim will speak on the topic Globalisation and Pandemics: Risks, Opportunities and Preparedness. He will discuss the current COVID-19 outbreak through the lens of globalisation and the unique risks Singapore faces, as well as the supra-national structures and processes Singapore has to encourage and nurture for our own protection and safety.

Associate Professor Lim Poh Lian is Director for the High-Level Isolation Unit (HLIU) at the National Centre for Infectious Diseases (NCID), and Senior Consultant in the Ministry of Health (MOH), Singapore.

A/Prof Lim grew up in Malaysia, studied biochemistry as an undergraduate at Harvard, medicine at Columbia, and public health at Tulane. She completed her internal medicine residency at Harvard’s Beth Israel Hospital, and infectious diseases (ID) fellowship in New Orleans.  She and her family moved to Singapore in 2003, out of a calling to serve Christ in Asia.  For her work as a front-line ID physician during the SARS outbreak, she received the Courage Star and National Day Commendation Medal.

A/Prof Lim currently chairs the WHO’s Technical Advisory Group for Health Security Interface, working on preparedness and response for deliberate events.  She was appointed to the Global Outbreak Alert and Response Network (GOARN) Steering Committee for a decade, the UN Secretary General’s Global Health Crises Taskforce in 2016, the WHO Advisory Group on Reform of Work in Outbreaks and Health Emergencies in 2015 post-Ebola, as well as various high level MOH taskforces for outbreak preparedness and response. She has been active in outbreak response for COVID-19, dengue, chikungunya, leptospirosis, H1N1 2009, as well as Singapore’s national preparedness for Ebola, MERS, Zika and yellow fever.

A/Prof Lim served as Head of the Department of Infectious Diseases at Tan Tock Seng Hospital from 2012 to 2016, and is Head of the Travellers’ Health & Vaccination Clinic at Tan Tock Seng Hospital.  She is on the faculty of LKC and NUS Schools of Medicine and Public Health, and has published extensively including the New England Journal of Medicine, Emerging Infectious Diseases and other journals. Professional interests range from outbreaks, public health strategy and vaccines to travel, tropical and HIV medicine.

For this forum, A/Prof Lim will discuss the biomedical and public health features of the current COVID-19 outbreak.

Professor Euston Quah is the Albert Winsemius Chair Professor and Head of Economics at the Nanyang Technological University (NTU), Singapore, an Adjunct Principal Research Fellow of the Institute of Policy Studies at the National University of Singapore (NUS), and a visiting Hengyi Chair Professor at Zhejiang University, and an Eminent Visiting Professor at University of Brunei Darussalam. He also holds a joint appointment with the Lee Kong Chian School of Medicine at NTU. He is a Distinguished Fellow and Member of the Scientific Committee at University of Economics, Ho Chi Minh City. He was formerly Chair, School of Humanities and Social Sciences, Vice-Chair of the Sustainable Earth Office, Senate Chair on University Policies at NTU; and Vice-Dean, Faculty of Arts and Social Sciences; Deputy Director of the Public Policy Programme (now the Lee Kuan Yew School of Public Policy); and headed the economics department at NUS.

A prolific writer, Professor Quah has published over 100 papers in major internationally refereed journals and opinion pieces. Selected works include an international publication on cost-benefit analysis for Oxford University Press, 2013; a lead journal article in World Economy in 2015; a Commentary in the Asian Economic Policy Review in 2016; an invited paper in the Macroeconomic Review in 2017; and an invited paper in the Asian Development Bank Institute monograph (2020).

Professor Quah is also the co-author of an Asian Edition of the best-selling Principles of Economics text with Gregory Mankiw of Harvard University, now a second edition in 2013. The Third Edition will be published in 2020. His earlier book on Household Production: Theory and Measurement, published by Ashgate, UK, was selected for inclusion by the International Library of Critical Writings in Economics in 2004, and much of his work on household production valuation had received favourable reviews in reputable journals such as the Journal of Economic Literature, the Economic Journal and the Journal of Labour Economics. Professor Quah was also recognised as an internationally respected environmental economist when in 2005, he was invited by UNESCAP as one of twelve eminent speakers in the Asia-Pacific in the Eminent Environmental Economists Symposium held in Seoul, Korea. Professor Quah’s book, Singapore 2065, published by World Scientific in 2015 celebrating Singapore’s fifty years anniversary, was selected by the Singapore Government among fifty items placed in a time capsule for unearthing in 2065.

Professor Quah advises the Singapore government in various Ministries and was a Member of the Prime Minister’s Economic Strategies Sub-Committee on Energy and the Environment. He had served on the Boards of Energy Market Authority, Fare Review Mechanism Committee of the Ministry of Transport, Board Member of the Energy Studies Institute at NUS; Member of the Board of Trustees, Institute of Southeast Asian Studies, and presently sits on the Government’s Market Compliance and Surveillance Committee; the Singapore Medical Council’s Complaints Committee; the Advisory Panel of the Ministry of Finance, the Resource Advisory Panel of the Prime Minister's Office, and the Special Committee on Informed Consent of the Ministry of Health.

Professor Quah has also served as the Principal Advisor for Cost-Benefit Analysis and economic valuation projects for the Central Narcotics Bureau; the Singapore Police Force; the National Environment Agency; the Ministry of Environment and Water Resources; the Land Transport Authority; the former Ministry of Community Development, Youth and Sports; and the Competition and Consumer Commission of Singapore.

In 2016, Professor Quah was appointed a Member of the Social Sciences Research Council of Singapore. He is also a Review Panel Member for the Bill and Melinda Gates Foundation project hosted by the Overseas Development Institute, London; and in 2015 was inducted as a Fellow Member of the prestigious learned society, the European Academy of Science and Arts. Professor Quah is the Editor of the Singapore Economic Review since 2002, and the President of the Economic Society of Singapore since 2009. In addition to being External Reviewer for economics schools and invited Eminent Visiting Professorships to a number of Asian universities, he has also been invited by Stanford University, Princeton University, Zhejiang University, Fudan University, the USA Inter-Pacific Bar Association, WWF for Asia, UNESCAP, Earth Institute of Columbia University (Asian Meetings), Asian Development Bank Institute (Tokyo) and Asian Development Bank to speak at their functions and conferences, and he is one of the most highly cited and influential university economists in Singapore.

The following is an abstract of what Professor Quah will touch on during the forum:

The Novel Coronavirus: What do Economists have to say?

Attention on the novel coronavirus (COVID-19) outbreak has been largely centred on its widespread health impacts. It has also weighed heavily on the global economy and stock markets worldwide. However, the economic impacts of the coronavirus extend far beyond the financial world. What measures can economists recommend to the government to deal with such breakouts now and in the future? Understanding the incentives and disincentives in place, marginal costs and trade-offs can help reduce the damage from such outbreaks. Through a series of questions, utilizing the tools and principles of economics, the talk aims to explore topics including: What is the total economic loss of the virus? How is productivity affected? What are the externalities of such epidemics? How will it impact globalization? How does such epidemics compare with other pressing issues, such as climate change, in terms of their importance? How do we allocate resources among these competing needs? Should extra powers or responsibility be given temporarily to governments to deal with fake news in times of such crisis, and where and how to draw the line? Is there an optimal level of information? What are the other public health issues?