Tembusu College recently hosted two prominent Japanese figures in conversation sessions known as Master’s Teas. Famed hairstylist Shunji Matsuo, who incidentally held a hair show in Tembusu two years ago, returned to Tembusu on Jan 22. Shunji, who has over 40 years of international hairstyling experience, used to work in the major fashion capitals of Japan, Europe and the United States. He arrived in Singapore from Jakarta in 1999, and is now a Permanent Resident of Singapore, with 15 salons around the region in Singapore, Malaysia, Vietnam, Philippines and Indonesia under his eponymous group. The very next day Tembusu hosted Ambassador Takaaki Kojima, who was Japan’s Ambassador to Singapore from 2004 to 2007. He was also Ambassador to Australia (2007-2010), and then Ambassador in charge of International Counter-Terrorism Cooperation from 2010 until he retired from Public Service in 2011. He is currently a Visiting Senior Research Fellow at the Institute of Southeast Asian Studies (ISEAS).

Ambassador Kojima’s session was dominated by questions on the China-Japan territorial tussle over the Diaoyu/Senkaku islands – a particularly relevant topic, especially coming off the Regional Outlook Forum organized on Jan 9 by ISEAS. Associate Professor Clancey, Master of Tembusu College, opened the discussion by asking for the Ambassador’s views on Professor Tommy Koh’s suggestion that China and Japan take their dispute to the International Court of Justice. Ambassador Kojima does not think that likely to happen due to differing interpretations of history.

Having been based in Beijing from 1989 to 1992, Mr. Kojima noted that history education in Chinese schools had intensified since he left, and that younger people tended to hold more anti-Japanese sentiments than those who had actually been through the Second World War. He gave the reason for this as being a push to reclaim the legitimacy of the CCP after the fall of the USSR in 1991.

The Ambassador laid out the Japanese perspective: Japan had incorporated the Senkaku Islands in 1885, following surveys conducted in 1884 showing that the islands were terra nullius, or belonging to no one. They had done so before the Treaty of Shimonoseki, which ended the First Sino-Japanese War. He noted that China did not subsequently claim the islands (as it had claimed Formosa, now known as Taiwan) until much later, in 1971, following another survey which showed the islands having resources of potential benefit to China. “The past behaviour is very important,” he said. “Up to the early 1970s, they had not laid any claim, even after the defeat of Japan.” Japan, therefore, feels itself in no position to bring the case to the ICJ as a dispute, and China in turn seems unlikely to do so.

Another question asked was whether having no standing army made the Japanese felt like second-class world citizens. Ambassador Kojima did not think so, noting that the Japanese people accept the constitution (which prohibits a military) and can revise if they wish with a two-thirds majority vote. So far, there has been no successful effort to revise this aspect of the constitution, though Japan has a strong Self-Defence Force. However, one area the constitution leaves unclear is whether or not Japan is allowed to participate in collective defense – defending a country that is being attacked by a third party – in the face of the rising military strength of China.

Ambassador Kojima also addressed other issues such as pressures for additional Japanese apologies for the Second World War, amongst others. He also spoke about his recent book, entitled ASEAN-Japan Relations, published by ISEAS, which he co-edited with Professor Takashi Shiraishi from the Center for Southeast Asian Studies at Kyoto University. 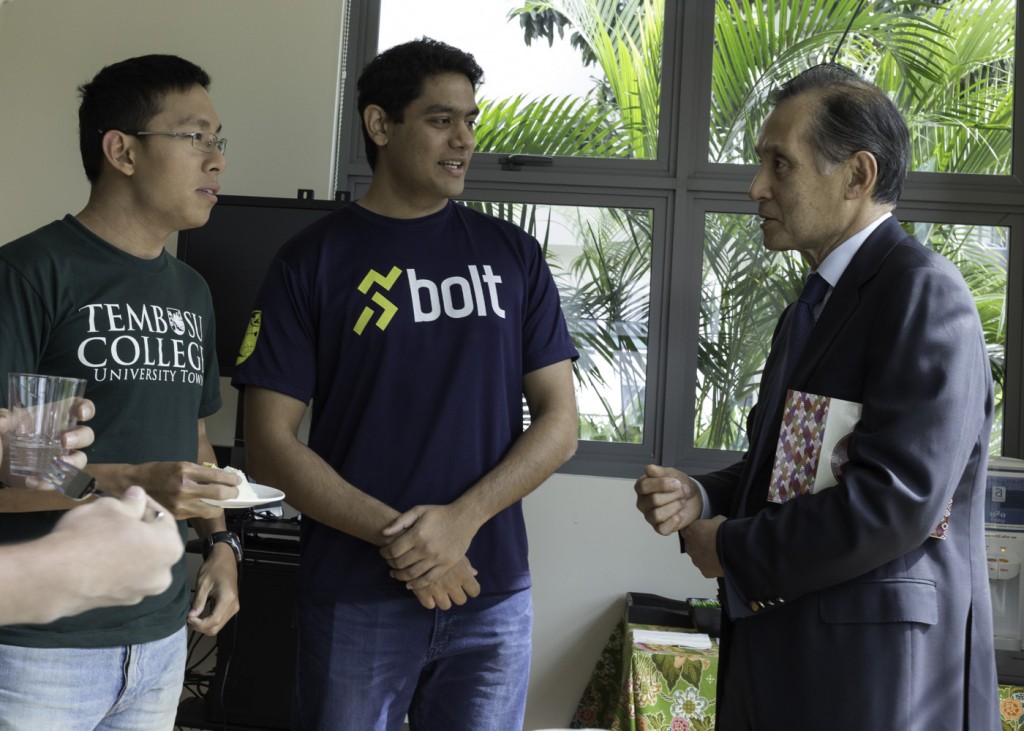 Shunji Matsuo deals with negotiations of style. Having worked in New York for 22 years, and styled the likes of Donna Karan and Madonna, he has plenty of experience under his belt. In fact, responding to the opening question by Prof Clancey about his experiences as a young man striking out in a foreign land, Shunji showed great humility in deferring to his mentor, Suga Yusuke. Suga’s was the first salon Shunji worked at in New York, launching his career as a celebrity hairstylist. Suga enjoyed great fame for his styling of 1976 Olympic figure skating gold medalist Dorothy Hamill’s hair – her “wedge” haircut became a huge hit all over America and the world. “There is only one star,” he said of Suga, “there cannot be another”.

Asked about how he negotiates disputes with his customers, he gave the example of a lady who was unhappy with his styling as she had wanted something simpler. “I was very sad for the whole day,” he recalled. “But the next day, you wake up, you forget.” The celebrity stylist claims he “knows what women want”, and how to make them look good – a claim that few would dispute. He describes the negotiation of style with his customers as “initially tense”, due to the personal nature of one’s hairstyle. But he is steadfast about not wanting to do a simple trim. “For me, I like to change [people’s hairstyles]. This is my specialty,” he said. As for his personal style, he has a preferred stylist of his own, and also gets his inspiration mostly from fashion magazines or the streets of Japan, in cities like Tokyo and Osaka.

Recently Shunji has launched a new project encouraging stylishness in older people. “There are so many others who can take care of young people,” he said. “I will take care of older people.” 25 per cent of Japan’s population is 65 years old and above, and too many are drab, he believes. In contrast, older people in New York he describes as colourful and independent. “I want to change this slowly, make them happy,” he said.

Shunji also gave some business advice. “You have to sell yourself”, he advised young entrepreneurs amongst the Tembusu students in the room. He used a PR company to spread news about his salon to more people in the early days, letting him concentrate on cutting hair and running the shop. He also gave three other pieces of advice: Don’t overstock, let queues form, and it’s better to be understaffed than overstaffed. In other words, less is more.

There was media coverage of the session by NHK, the Japanese national broadcaster, which was in Singapore to film a programme on Shunji’s life and career. This is the first time a Tembusu Master’s Tea will be featured in a national television broadcast.

During their respective Master’s Teas, both Shunji and Ambassador Kojima expressed their fondness for Singapore. Shunji credited much of his current success to his being in Singapore. Ambassador Kojima declared that out of the 25 countries he had been to, he was particularly fond of Singapore, and would visit ISEAS every two months. “When we are in Changi Airport, we don’t feel like we’re in a foreign airport,” he said.