Several Tembusians stepped up to the microphone and asked critical and insightful questions at the last Tembusu Forum on 20 Feb.

Entitled “Will there be another Sino-Japanese War?”, the Forum, held at the Tembusu Multi-Purpose Hall, was moderated by Professor Tommy Koh. The panelists were Professor Wang Gungwu, chairman of the East Asia Institute; Dr Kei Koga, assistant professor at the Nanyang Technological University’s School of Humanities and Social Sciences; and Mr Peh Shing Huei, deputy news editor with the Straits Times.

Mr Peh, who had served as the bureau chief in China from 2008 to 2012, shared anecdotes of instances where China had shown itself to behave assertively, such as their demand for a formal apology from Japan even after the release of Zhan Qixiong in 2010, who had been detained for two weeks in Okinawa after his trawler collided with two Japanese patrol vessels near disputed islands in the East China Sea.

Dr Koga, who is also a Japan-U.S. Partnership Fellow at the Research Institute for Peace and Security in Tokyo, looked at cases of misperception or miscalculation in Sino-Japanese issues, the image of Japan’s political trend, and the strategic trend in the balance of power between Japan, China and the United States.

Prof Wang spoke took a step back to critically examine the role of history in shaping the future. He said that historians may make predictions “just for fun” to see if things could have been done a different way. “Unfortunately,” he added, “there are many, many examples I can think of where we don’t learn [from history]”. He also noted the potential use of history as a tool by those who know more than others, which can give rise to abuse of power.

During the question and answer session at the end, several Tembusians asked noteworthy questions that added new dimensions to the topic. One Tembusian asked how propaganda distribution in China has changed now with the Internet, prompting Prof Koh to ask Mr Peh if Chinese netizens tended to be nationalistic. Mr Peh, who noted that social media does improve the reach of extremist views, felt that around 50 per cent of netizens in China expressed angry views.

Another Tembusian raised the interesting possibility of other countries forming a bloc in response to an increasingly aggressive China. Prof Wang observed that in a maritime world, China is continent-bound, with potential enemies on all its borders, and is unable to consolidate power anywhere in the world like the US can. China, therefore, is highly conscious of threats to their land.

Another question compared the situations between US-Japan and Japan-China relations, noting that US and Japan have reconciled after the Second World War, but China and Japan are still enemies. Prof Wang responded by observing that the US had had no intentions of making permanent enemies with the Emperor, a strategy which aided the reconciliation. However, Prof Koh noted, this does not mean that Americans have forgotten what happened during the war.

As to the overall question of the Forum, Prof Koh summed it up as: Nobody believed that a Sino-Japanese war was on the charts. Mr Peh felt it all boiled down to the tussle between the extremists and the more rational actors in any situation involving Sino-Japanese relations. Dr Koga emphasised the importance of open channels of communication between the two nations; whilst he said they currently lacked such open communication, he also felt that there was no political will for either party to engage in battle. Prof Wang felt there could be lessons learnt from the Cold War, and chances were that the US would not engage as a third party. But as Prof Koh mentioned, other countries could do their part in a small way to encourage China and Japan to stop demonizing each other. Otherwise, Prof Koh concluded, the ASEAN project of peace and prosperity in Asia can never be achieved.

While the topic may have been moot, the Forum was certainly engaging in terms of eliciting thought-provoking questions from the floor. Furthermore, each panelist brought a different perspective to the table, showing that no matter which way one looks at it, it is ultimately best for everyone if there was no new Sino-Japanese war. 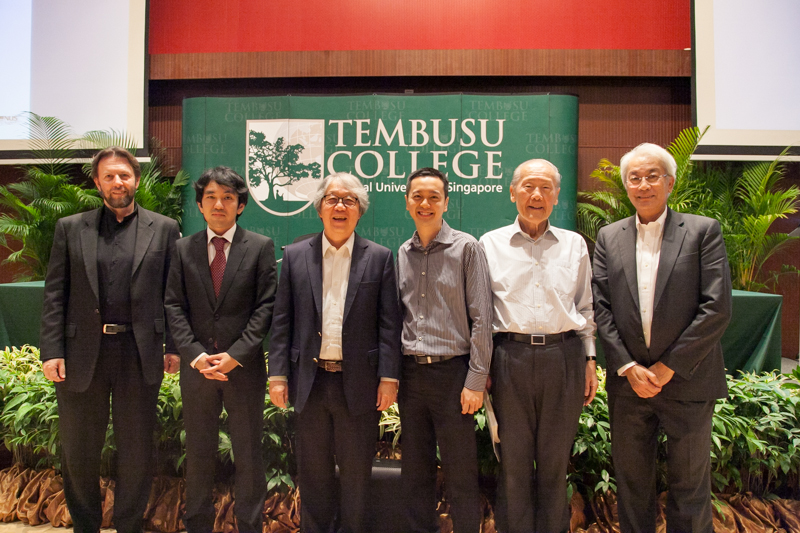 The panelists and guests after the Forum