On Apr 7, the study ‘Crafted assemblage: young women’s ‘lifestyle’ blogs, consumerism and citizenship in Singapore’ was published as a special issue in the Taylor & Francis Visual Studies journal. Listed as authors were University College London anthropologist Dr Jolynna Sinanan, Tembusu College senior lecturer and member of the Science, Technology and Society Cluster at the Asia Research Institute Dr Connor Graham, and Tembusu alumnae Kua Zhong Jie, who is still an undergraduate in NUS. Zhong Jie writes on her experience working as an undergraduate researcher and having her own paper published. The paper can be accessed here.

Q: How it was like to work with a fellow? How did you manage to juggle this work with your studies and other commitments?

A: The story began on December 13, 2012 (gosh, two years ago already!) through an email with Dr Connor proposing that he had “a work opportunity for [me] over the holidays and it would involve doing some visual analysis”. At that time, I was in the process of writing another piece of work about leadership in the non-governmental sector for Dr Connor – an extension of the leadership module which I had completed under his tutelage. The methodology which I had adopted for that paper was visual analysis. To be honest, I was struggling a little with the approach since I was new to it. Hence, when Dr Connor suggested the opportunity to me, I thought for some time, “Should I try and do visual analysis again or just give up the opportunity? Why not use this chance to improve my analytic skills? Perhaps I might be able to use it for my psychological research (my major is psychology) in the future.” As you can see, I did not embark on this project knowing that I would be one of the authors of the final work, it was only through the process of writing and discussions that I became the third author together with Dr Connor and Jo – who is a fellow in anthropology at UCL (very accomplished!). With this responsibility, I remember feeling excited, eager, yet a little nervous and afraid.

In the process of this project, there were many times where I held doubts about my own abilities, especially in writing and analysis because I never thought of myself as an individual who could write well (much less be an author!). Compared to my co-authors, I also felt that I was not good enough due to my lack of experience. They were both fellows while I was only a student, in terms of hierarchy, I saw myself as inferior. However, these self-doubts existed only in my own beliefs, because Dr Connor and Jo always treated me with equality and respect. In making decisions about the directions where the project was going, Dr Connor was always interested in listening to my opinions. During the process of writing, he also gave me the space to make decisions about what I wanted to do for the project and even when I was tasked to do a particular analysis, he would do it as well so that we can compare our work to check if our interpretations of the analysis align. Both Dr Connor and Jo continuously challenged me with writing tasks so that I could practice and become better.

I truly began to feel confident in my abilities when I saw that my contributions were valuable and because Dr Connor and Jo always saw me as a team member in our collaboration. I am really grateful to them for being so modest, engaging and committed – just the way they are!

We completed this paper around mid-February 2013 when school had already begun and we also submitted it to the publisher during that time. We then received feedback and reviews from the publisher only in July 2013 where we had to edit our paper according to their comments and submit it back to them for the second time by August 2013. At that time, I had already graduated from Tembusu College and was working in India for the NUS Overseas College program. In December 2013, we were asked to confirm the abstract and title of our paper and also to provide our individual biographies. In February 2014, we were asked to sign copyright proofs of our article. And, *drumroll please*, the article was finally FINALLY published on the 7th April 2014 in the 29th Issue of Visual Studies!! I was in Prague that night and I was overjoyed because not only has my first paper been published, but the long wait was finally over! 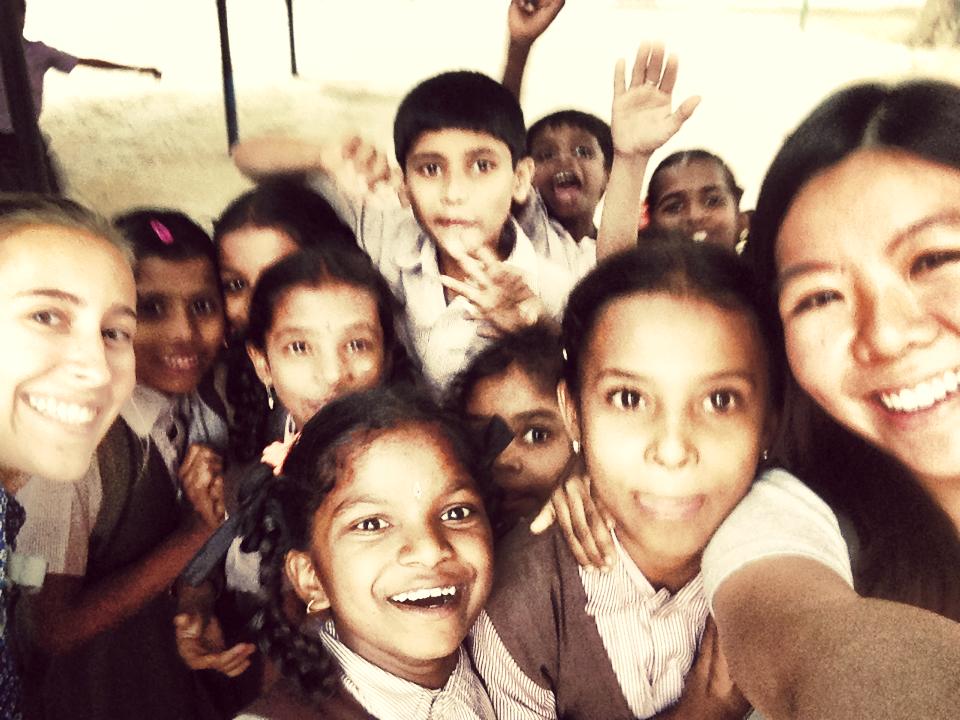 Zhong Jie with the children she taught in India

Q: Tell us briefly what the paper was about?

A: In this paper, we were very interested in examining what we can make of young women’s “lifestyle” blogs in Singapore. Through the visual analysis of a few carefully selected blogs, we emphasise how these blogs are an ‘assemblage’ – that is, intentionally chosen aspects are put on display by bloggers, yet what is not on display is often as informative as what is included. We argue that what emerges is an insight of the relationship between women’s consumerism in Singapore and expressions of citizenship where thriftiness, aspiring to a lifestyle characterized by wealth, informed consumption and leisure is encouraged. (To see evidence for this argument and the ways we analysed the blogs + photos of pretty girls – always desired, haha – please read our paper!)

Q: What are some of your own thoughts on the subject?

A: Where once upon a time we were only consumers, now we have the power to both create and consume simultaneously. It is so interesting, for me, to see how this power can be extended to providing instructions on how to engage in consumption in contemporary Singapore.  Think about it, we all hold the ability to construct a publicly visible self who can negotiate with his/her own expressions of citizenships through online platforms and even influence what others want to consume and notions of what is ideal and worth pursuing for. What exactly is the extent of the power that technology affords an individual living in the 21st century? It seems limitless! (Day-dreaming about ruling the world muahahaha)

A: In life, you get just about as many chances as you are willing to take. When new opportunities arise which you view as challenging and you begin to doubt your abilities, trust yourself and go for it! Every great accomplishment starts with the decision to try. You would be surprised how often this decision turns out better than you imagine it to be. Believe that you are good enough. Our professors are always willing to challenge us to become better!