October 15, 1990. It was Charles Vest’s first day of office as President of the Massachusetts Institute of Technology (MIT). When he arrived in the day at his office however, he found a poster-covered bulletin board at where the door was supposed to be. A portable, wooden-frame bulletin board was carefully constructed to fit into the doorway of what was the President’s office door by MIT hackers. The President was welcomed to the University in typical MIT style – a harmless prank or in MIT lingo, a “hack”.

Charles Vest was famously amused by the whole prank and remarked that as President he wished for the continuation of such intelligent jokes.

May 9, 1994. What appeared to be a police cruiser sat on the top of The Great Dome at MIT. When the authorities came to take a closer look, they realised it was another one of those famous hacks. The hackers had brought up the external panels of the car and supported it with wooden struts in the interior. The siren lights were flashing and there was even a dummy in the car dressed like a policeman, a box of donuts inside, and an MIT parking summon (“no permit for this location”) amongst many other small details. The car was there only for a few hours before it was taken down, but the media had already got hold of the story and it became international news. As usual with all MIT hacks, the goal was to amuse and to entertain: and in this case they certainly did.

The list of MIT hacks is a long one. From other famous ones like the disrupting of a Harvard-Yale football game with a weather balloon to turning the great dome into a mock-up of R2-D2s head to commemorate the release of Star Wars Episode I, MIT hacks have garnered international fame. The hacks were almost always difficult to pull off and were meant “to prominently demonstrate technical aptitude and cleverness, or to commemorate popular culture and historical topics”. Hacks form a big part of the culture at MIT, so much so that the school publicizes this hacking culture in their college admission websites.

These hacks are a point of pride for the college and are done by regular students who come together to plan and pull of these “pranks” without official college permission. Arguably, this very creative atmosphere sets the tone for the extremely vibrant campus life that MIT is famous for.

On a matter closer to home, the 3rd CSC’s election in 2012 saw 11 candidates running for 11 positions, resulting in what was initially a walkover. This did not sit well with some members of the college and a big debate was sparked over the role of democracy in the college and the issue of a need for a vote of confidence. This set the back drop to one of the most famous Tembusu hacks ever conceived. Alumni Cedric Chin recounts:

The election period in 2012 saw 11 candidates running for the same number of positions. As there was the same amount of candidates as there were positions, there would be a walkover instead of an election. This created much controversy – the healthier bits of it were an actual debate, the unhealthy bits were quite a bit of grandstanding (e.g. if we receive x number of likes on this Facebook post, we will submit a motion, bla bla bla, yada yada yada, and then a huge number of comments on Facebook, which devolved into the online version of a shouting match).

The seniors (me included) found this very tiresome.

For starters, this was a college student council. It didn’t matter in the grand scheme of things. Sure, it mattered to the college, but not to the extent of the furore it created (acid test: would it matter when you are 30 years old and with wife and kids? No? There you go). Secondly, these candidates were about to do a thankless job for the whole college. Why make their lives more difficult? Third, a bunch of us seniors thought the college was starting to take itself a little too seriously.

So we decided to make fun of it all. Over dinner, I suggested to a friend: wouldn’t it be cool if we just set up a sword in a tree stump in the lobby, and proclaim that all the controversy was useless and we should just crown a king? He said let’s do it.

So a few of us got some leftover cardboard, painted it up, and scoped out the tree stump to see how we could make it impossible to pull out. I designed a poster and wrote the text. We got Haena, then the CSC member in charge of the CSC poster stamp, to approve our posters (she did it with some glee because she, too, thought the controversy was unproductive). Then I stayed up till 4am to put it all up.

The next day the fun didn’t last long. The college ordered it to be taken down. So shortly afterwards they removed the tree stump as well.

But I thought it was pretty important not to take ourselves too seriously. I hope the spirit continues… 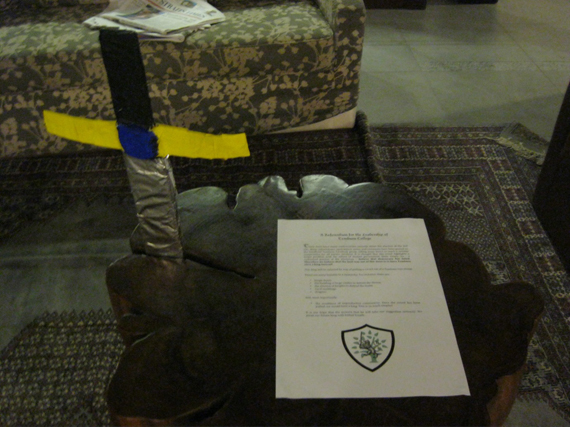 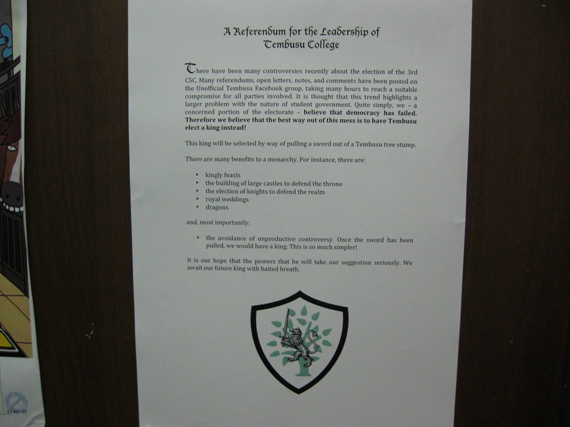 While the issue might have caused quite a bit of stir,  this prank was successful in amusing and making light of what could be seen as pedantry.  Such “hacks” have their place in a community like an undergraduate college as it showcases creativity among the student body, audacity, and a community who is willing to laugh at itself.

Here in Singapore, we may not be able to match the scale or audacity of the pranks and hacks in the US colleges, but the lesson for us still stands – we are all really only young once. Other than providing a community of intellectuals and having a platform for artistic endeavours, a college should also be a vibrant place of bold young people who would try something intelligent and playful just to lighten up the mood when things are down.