My Student Exchange Programme (SEP) in AY2014/15 Semester 1 was different from that of most NUS students in two ways. Firstly, my destination – Yogyakarta in Indonesia – is merely a stone’s throw away from Singapore while my friends prefer faraway places outside Asia. Secondly, all my modules were graded by professors from the Department of Southeast Asian Studies whereas my peers enjoyed the privilege of exercising their S/U options during their semester abroad. You might ask why I signed up for such a ‘boring’ SEP with so much academic pressure. To be honest, I was only aware that I would not be going to a place with four seasons but completely clueless about the academic rigour that would confront me for three months. Nonetheless, I must admit that I had the most satisfying academic experience in my entire university life thus far during this SEP.

As a Southeast Asian Studies major, my SEP is a department-based one called the ‘Semester-in-SEA’ programme where students live in Yogyakarta (Indonesia), Hanoi (Vietnam), or Khon Kaen (Thailand) depending on the language track they are on. My language of specialisation is Bahasa Indonesia so my default SEP destination is Yogyakarta. During this programme, students have to do two Independent Studies Modules (ISM), one overseas internship module and one language module. They have the option to do an additional extended overseas internship module too. These modules, except the language module, are graded by the staff from my department who provide guidance for my ISM. 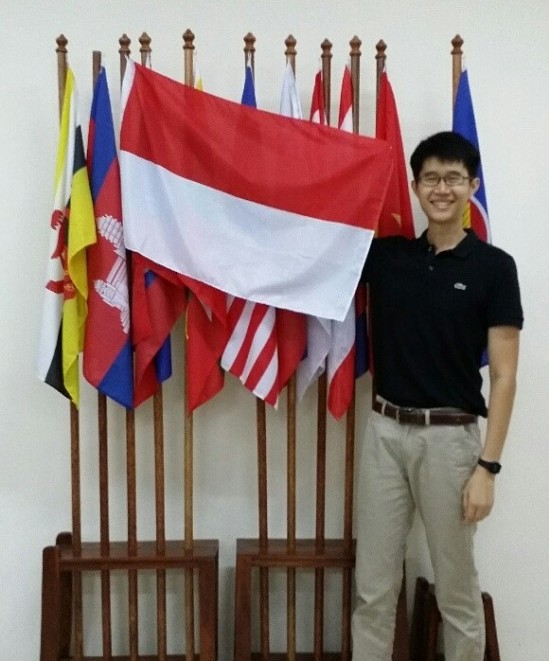 Spending a semester in a Southeast Asian country is uncommon among NUS students. Here I am posing with the Merah Putih, the Indonesian national flag.

The experience I had in Yogyakarta brought the meaning of ‘independent research’ to a whole new level. Even though I prepared two topics for both ISMs, I had to change the direction of focus for the first one (a local eatery) and replaced the topic entirely for the second one (a historical monument) after a few weeks in Yogyakarta. My conversations with the locals as well as first-hand observations were my main sources of cues on whether I should proceed with my plans. Of course, I kept close contact with my supervisors back in NUS and enlisted some help from the staff at my partner university, Gadjah Mada University. They provided me with comments and helped to set the direction for my ISMs.

Despite the uncertainties that marked my first few weeks of locating possible research angles, I knew that I just had to keep searching and speaking to people to find the ‘spark’. As much as I was apprehensive about my research progress, the experience allowed me to immerse in the society I lived in. I engaged in conversations with people from all walks of life: from trishaw drivers to professors, from parking attendants to business owners. During my SEP, I realized I was becoming more curious and observant. For instance, my curiosity on the Tugu Jogja, an old monument, had me looking for its photos in the past and that became the catalyst for one of my researches. As for the other ISM, observations on the dynamics of human interaction at a local eatery called angkringan prompted me to look more deeply into reasons behind its iconic status. The thirst to find out the answers brought me to several local libraries and online newspapers archives. I did not get answers all the time, but each step that I took brought me an inch closer. The independent research experience indeed contributed to my academic growth by several notches. 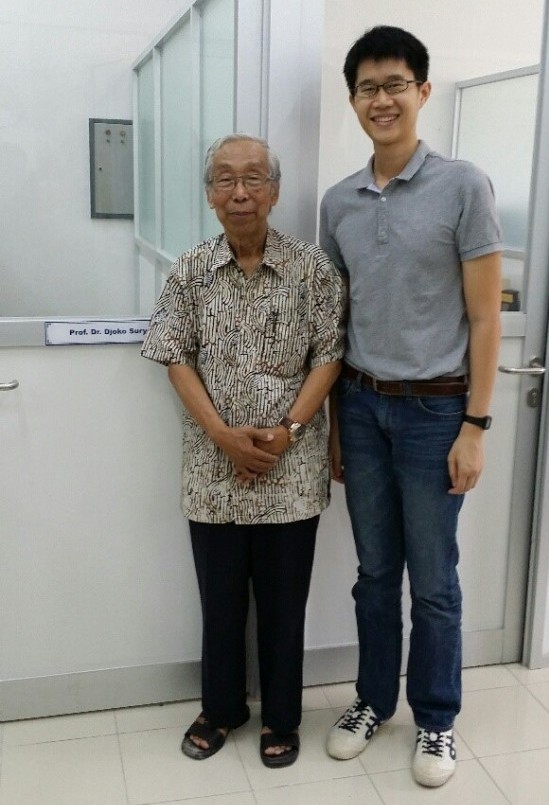 My ISM journey also brought me to an interesting conversation with a prominent Indonesian historian, Dr Djoko Suryo

Another reason why I found my semester in Yogyakarta fulfilling is because I could see the efforts I put into learning Bahasa Indonesia since my first semester in NUS coming into fruition. As Nelson Mandela said, ‘if you speak to a man in his second language, you are speaking to his brain; but if you speak to him in his mother tongue, you are speaking to his heart.’ I could not agree more. I believe that my ability to speak comfortably allowed me to start conversations and put my interlocutors at ease. Most Yogyakartans that I know are approachable but they appreciate foreigners who attempt to speak to them in their language. With considerable proficiency in Bahasa Indonesia, I could also gain access to academic resources in the language, which proved to be useful for my ISMs. Furthermore, I had the opportunity to help a local NGO called Aksara in translating their documents from Bahasa Indonesia to English during my one-month internship with them. It was indeed rewarding to know that my language skills was of some practical help to the local communities. 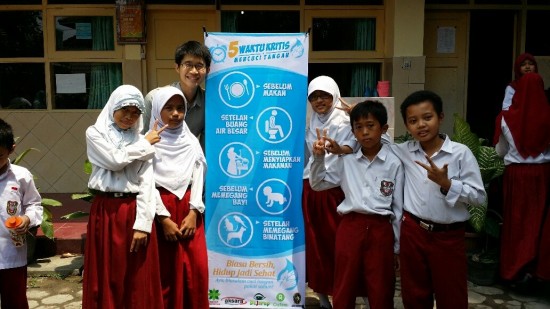 My Bahasa Indonesia helped me in befriending these little buddies during my volunteer work at a local primary school.

Of course, my exchange was not all work and no play. I had the privilege of experiencing Javanese hospitality during my three-day-two-night stay in a village called Sendangsari in the Kulonprogo District. I tagged along with one of my NGO colleagues to the village to attend a district-level celebration and little did I realize that I would be given VIP treatment! Upon knowing that I was an orang asing (foreigner), they excitedly put on the Javanese court servant attire for me and ushered me to join the VIP reception. It was a little awkward interacting with the mayor, officials and police chiefs because I was only there as a participant. There was no turning back for me when I was invited to join them at the VIP stand to watch performances put up by villagers! I was also accorded the honour of receiving a portion of the sesajen (offering) during the evening dinner ritual. My host family took care of me very well with meals and tour around the village too. Despite the unexpected VIP treatment showered on me, I was able to handle them with grace thanks to the experience I had with Tembusu Ambassadors. 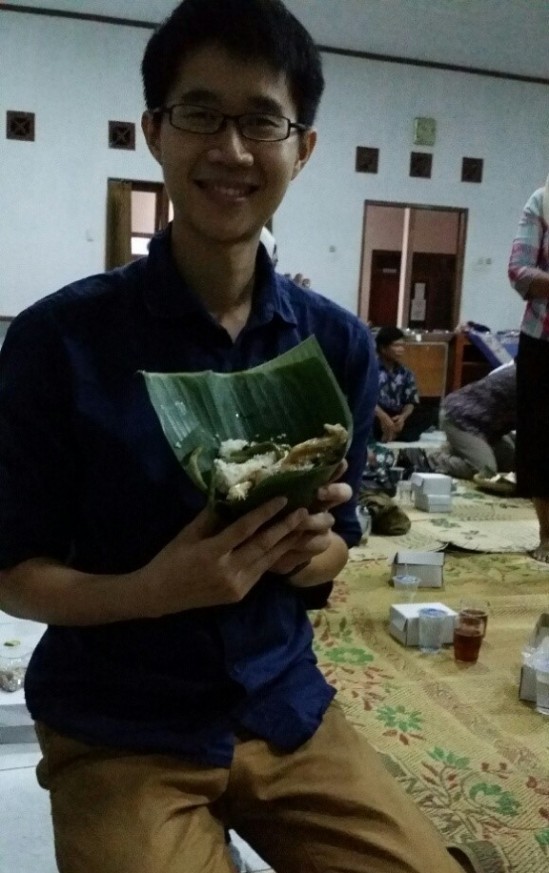 I had the honour of receiving the offering from the village chief during the dinner ritual.

Unlike most of my peers, the focus of my SEP was not on travelling but academic discovery and translating my newly acquired language into practical uses. As one of my ISM supervisors advised me before I left for Yogyakarta: “An ISM experience will not be a bed of roses; just enjoy the process.” Fortunately, I held that as my mantra and not only did I enjoy myself thoroughly despite countless setbacks, I also had a satisfying semester abroad.

Sarun Udomkichdecha is a polyglot, speaking English, Thai, Mandarin Chinese, Vietnamese, Bahasa Indonesia and Japanese to a high level. He is a 3rd year South-East Asian Studies Major in the Faculty of Arts and Social Science who spent his semester abroad in Gadjah Mada University, Yogyakarta, Indonesia. He did field work and research studies in Bahasa Indonesia there while also working internships with NGOs in the area.