“I confess I do not know why, but looking at the stars always makes me dream.” The words of Dutch impressionist Vincent van Gogh perfectly encapsulate mankind’s undying fascination with the stars. This is perhaps understandable when one considers that virtually all the energy on our planet comes directly or indirectly from our nearest star, the Sun. Which raises the inevitable question; how do stars produce energy? The answer lies in a domain of science known as nuclear physics. For all the advancements in scientific knowledge made over the last century or so, many today still do not understand the basics of nuclear reactions, and are thus unable to fully appreciate the significance that this field holds for our past, present and future. Over the span of two halves, this article will provide an overview of the two forms of nuclear reaction, namely fusion and fission, and relate these phenomena to the world that we live in.

To better comprehend nuclear reactions, we must first gain an understanding of the inner workings of an atom. Atoms are composed of three distinct types of subatomic particles. Protons are positively charged and electrons are negatively charged, while neutrons do not hold a charge. Protons and neutrons collectively form the nucleus (from which the word nuclear is derived), while electrons race around it in regions termed orbitals.

Nuclear fusion occurs when two atoms collide to create a larger and more massive atom, releasing energy in the process. In contrast with a chemical reaction, where atoms or molecules form compounds (via transfer/sharing of electrons), the product of fusion is a single atom of a new element. The overall effect is called nuclear transmutation, and can (loosely) be considered a form of modern alchemy.

Fusion is difficult because atomic nuclei are positively charged, and thus have a tendency to repel each other (similar to magnetic repulsion, where like poles push each other away). As a result, a high temperature and pressure is required to force the two atoms together. Therefore it is unsurprising that nuclear fusion only arises in the most hostile of environments; the cores of stars. 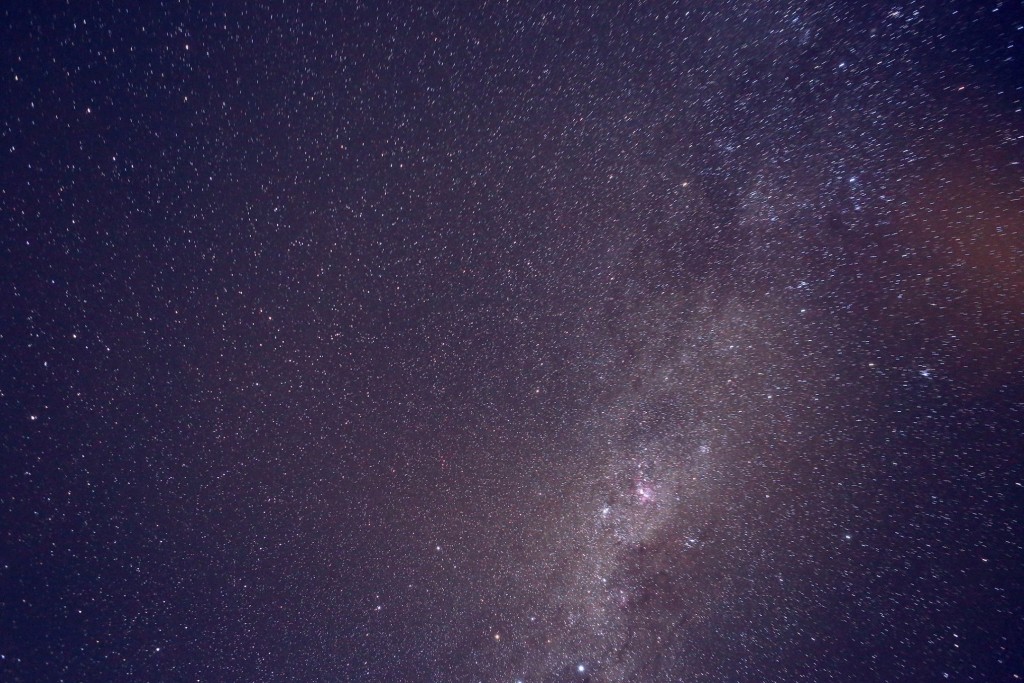 Milky Way, as seen from the Southern Hemisphere on a cloudless night.

Stars are born when clouds of gases (mainly lighter elements like hydrogen and helium) coalesce in space. As the atoms are pulled together by gravity, the temperature increases to a point where a fusion reaction is triggered at the core, and the star ignites in a blaze of heat and light. Throughout the majority of the lifetime of a star, hydrogen fuses together to form helium. However, there will come a time when the supply of hydrogen runs out, and helium fuses instead to create carbon and oxygen, which are heavier. In the case of smaller stars such as our Sun, the process ends when helium is exhausted, but for more massive stars fusion can continue beyond that point. Carbon and oxygen fuse into sodium, magnesium, aluminium, sulphur, and neon, all heavier still. This process of forming heavier elements propagates onward, terminating at iron, the most stable element in an atomic sense.

Over lifespans of billions of years, stars thus produce all of the most common elements in our universe. But even in their final moments, the stars have one last gift. In a violent stellar death known as supernova, massive stars implode under the force of their own gravity, and the resultant shockwave scatters the star’s elemental contents across space. The immeasurable pressures generated in supernovae result in one last burst of fusion, creating rare elements heavier than iron, such as gold, silver, and lead. Heaviest of all are the actinides; a family of radioactive elements that includes uranium, plutonium, and thorium.

It must be emphasised that stellar fusion is not simply a way of creating heavier elements; it is the only way of creating such elements. Immediately following the birth of the universe (in an event that scientists call the Big Bang), there was only hydrogen, helium and trace amounts of lithium and beryllium dispersed throughout the entire universe. Only after millions of years of stellar fusion and star death were heavier elements brought into existence. In time, this allowed planets like Earth to form, and life to begin. The carbon in our skin, oxygen in our lungs, and iron in our blood were all forged eons ago, in the embers of a dying celestial furnace. Nuclear fusion is responsible for enabling life on Earth, and may also allow for life elsewhere in the cosmos, now or in future.

Powerful as fusion is, mankind has yet to master it completely. Using today’s technology, it takes more energy to initiate and control a fusion reaction than is produced by the reaction itself. It does not take a genius to understand that this process is thus not (yet) viable commercially. That said, mankind has already managed to harness the forces of another type of nuclear reaction; fission, the subject of the second half of this article.

Author’s Note
This article owes an intellectual debt to a presentation entitled Star Death and the Creation of Elements, as delivered by Professor Brian Cox on BBC television. The original clip can be found here.

About the Author
Wei Xiang’s two favourite things are books and music. His idea of a good night is one spent reading a thought-provoking novel, with an album playing softly in the background. Of course he has many other interests as well, but those tend to involve, you know, going outside.