The St Jerome’s Laneway Festival, commonly referred to as Laneway, is an indie music festival that began in Melbourne, Australia, in 2005. In 2011, it expanded to Singapore for the first time, and has been held here on a yearly basis since then. Below, Isaac Neo and Sarah Chew give an account of their experiences at the festival. 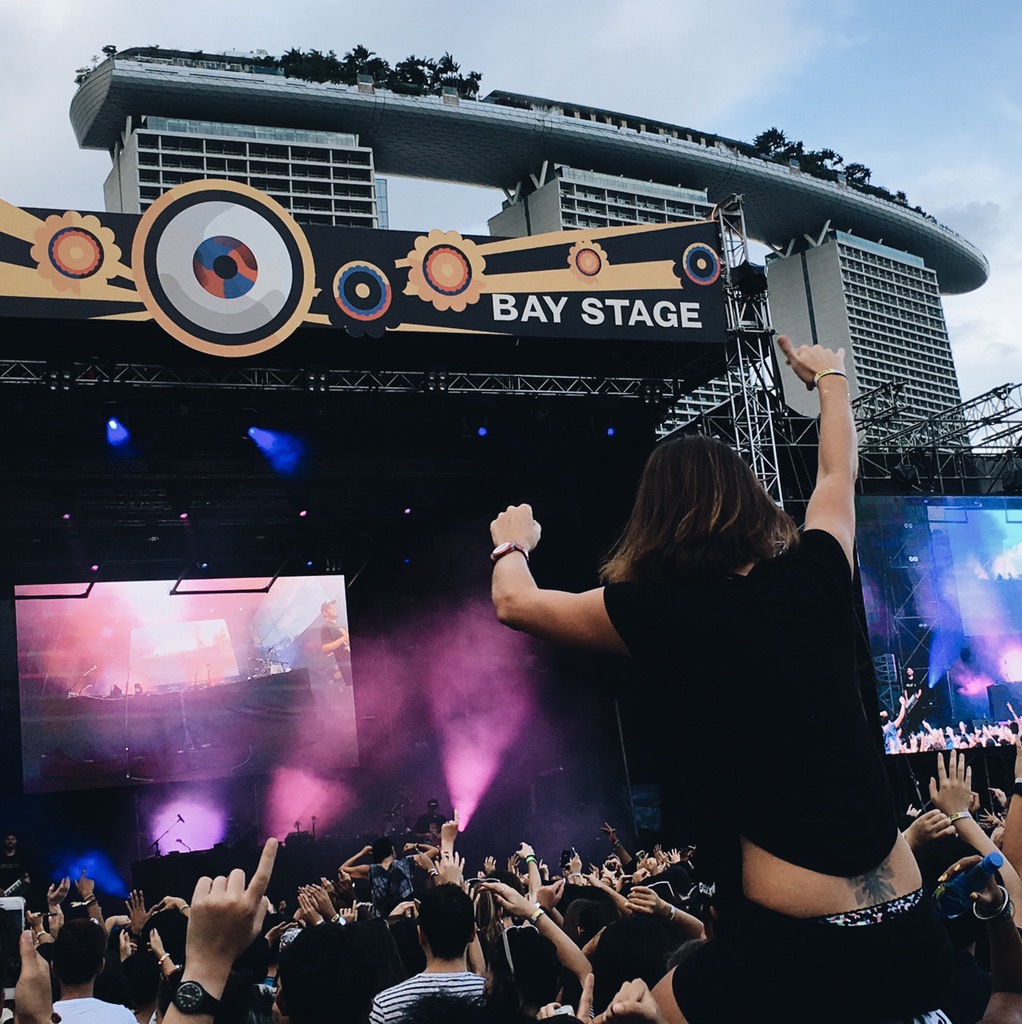 Isaac: Mention Laneway Festival to people and chances are the first thing they’ll say is, “The hipster festival?”

The common image that comes to mind when you think of Laneway would be of girls in sundresses and flower crowns, ethereal dancing and generally inebriated groups of people swaying to bands you’ve never heard of before. This is not untrue. However, this is but a mere snapshot of the crowd that attends the festival on a yearly basis.

Take me for example.  It would be difficult to label me as a hipster: people actually know the bands that I listen to, I abhor flamboyant  styles of dressing, and I do like the occasional Justin Bieber song (I mean, have you heard his newest album? If only my grades could make such a comeback…)

Despite not knowing my M83 from my Two Door Cinema Club, I attended my first Laneway in 2012, which was the second time it was held in Singapore, back when it was still at Fort Canning Park. And I had fun! It is an understated joy being able to attend a concert without any expectations, and being surprised by the quality of music on offer. I discovered new bands that I still listen to even until today, such as Chairlift and The Drums, and when M83 launched into an electrifying rendition of Midnight City to close the entire festival, I bounced along with the crowd into the night.

I still count that moment among my top concert experiences ever. 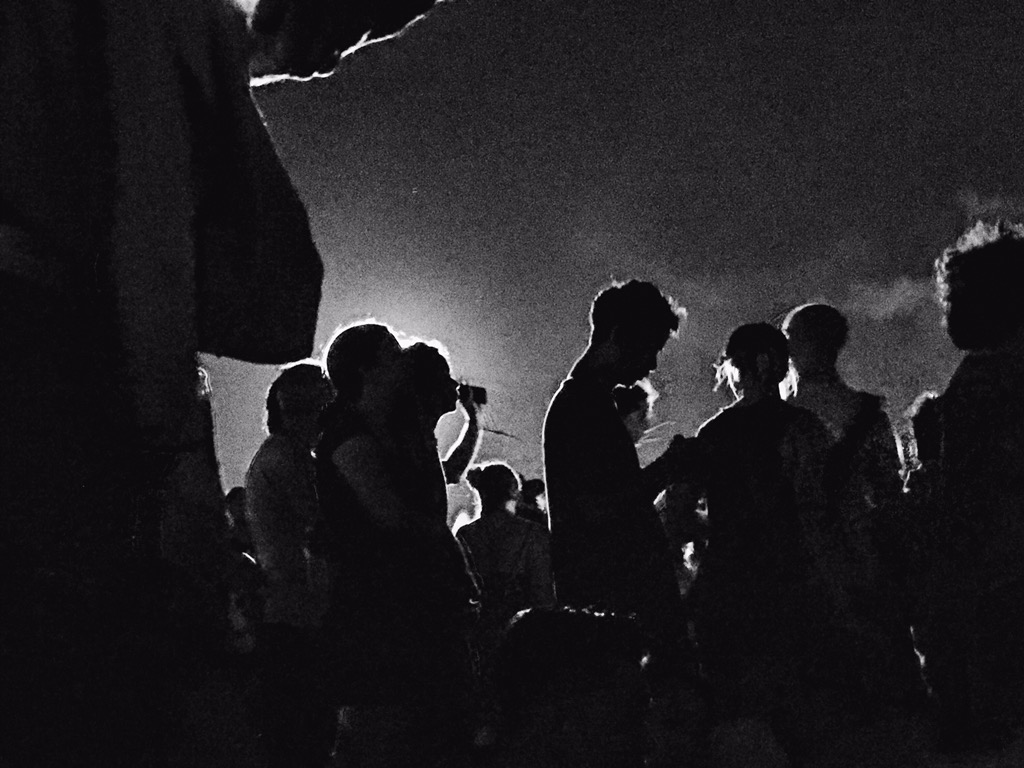 Since then, I’ve attended three more Laneways, the most recent one being my fourth. Every year, I toy with the perennial question, “Are the bands really worth the ticket price?” and every year I end up attending it to find myself generally having a good time. The audience has expanded exponentially since 2012, and the festival has become more of a place where it is trendy to “be seen”, rather than a true gathering of indie music fans.

Yet, this year was the first time I felt a little…jaded with the whole experience. Where before I would eagerly rush to the front for acts that I was excited for, such as the mosh pit for Royal Blood in 2015 (that was crazy), I was perfectly content this year to just sit and watch from my picnic mat. Perhaps it’s the novelty of the festival wearing off, or perhaps it’s because the festival has gotten a bit too crowded in recent years, but the magic I found in 2012 just isn’t there anymore.

But don’t let me put you off attending your first Laneway. I’ve never regretted attending a single edition of the festival. It is still one of the rare places where you can let your hair down, drink a little booze (in public nonetheless, shocker!) and dance like nobody’s watching, just for a day. That, I believe, is the true spirit of the St. Jerome’s Laneway Festival. 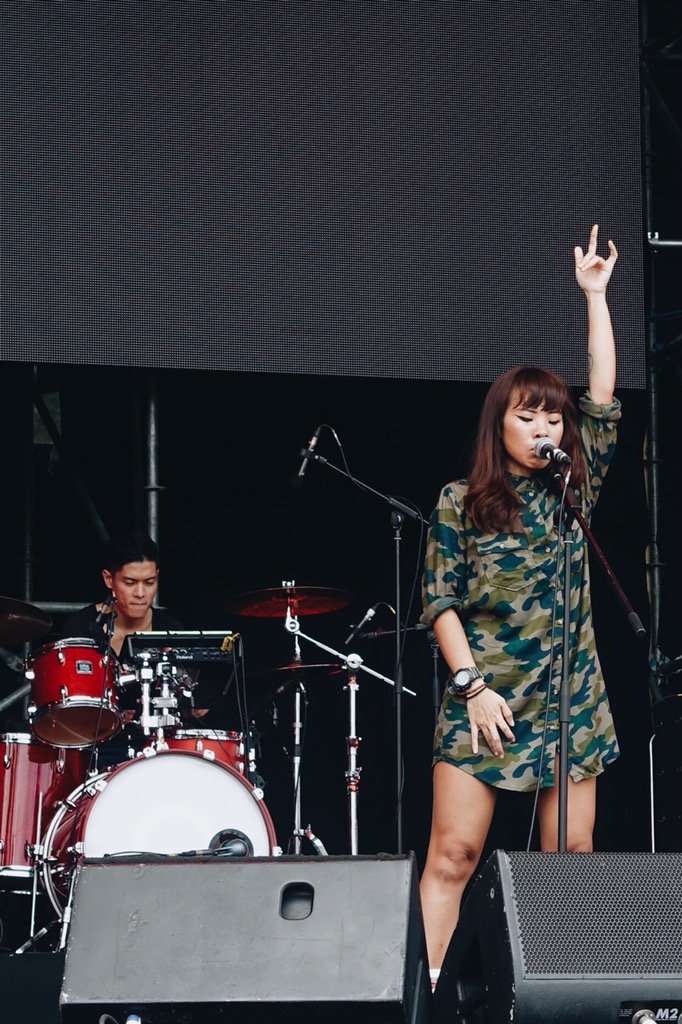 Sarah: I wish I had some cool, Nicholas Sparks-esque story that accompanied my recount of Laneway. Perhaps how my favourite indie band (no point in naming them since you probably haven’t heard of them anyway) was finally coming to Singapore and how I managed to make off with their guitar pick. Perhaps how that was the best day of my life because I met the love of my life when he tripped over me in his drunken stupor and fell in love with my mandala picnic mat. Perhaps.

Unfortunately, my story is much more somber than that. In all honesty, the first time I went to Laneway, I entered without knowing a single band playing, with tickets I got half price off from a friend who couldn’t make it at the last minute, just two days before the festival. This year it’s been pretty much the same story, except I wanted to go because of The 1975 and so I bought tickets off a nice NUS student on Carousell.

When I told friends that I was headed for Laneway I was met with the usual “Wah I didn’t know you’re a hipster?”, “Why are you paying so much just to try and be a hipster, I bet you don’t listen to any of them” or “Is that a new cafe?” line of questions. To answer your question, dear reader (it’s definitely one of the three – admit it), I went for Laneway because it’s a great avenue for me to find out about new music – when it’s cool. 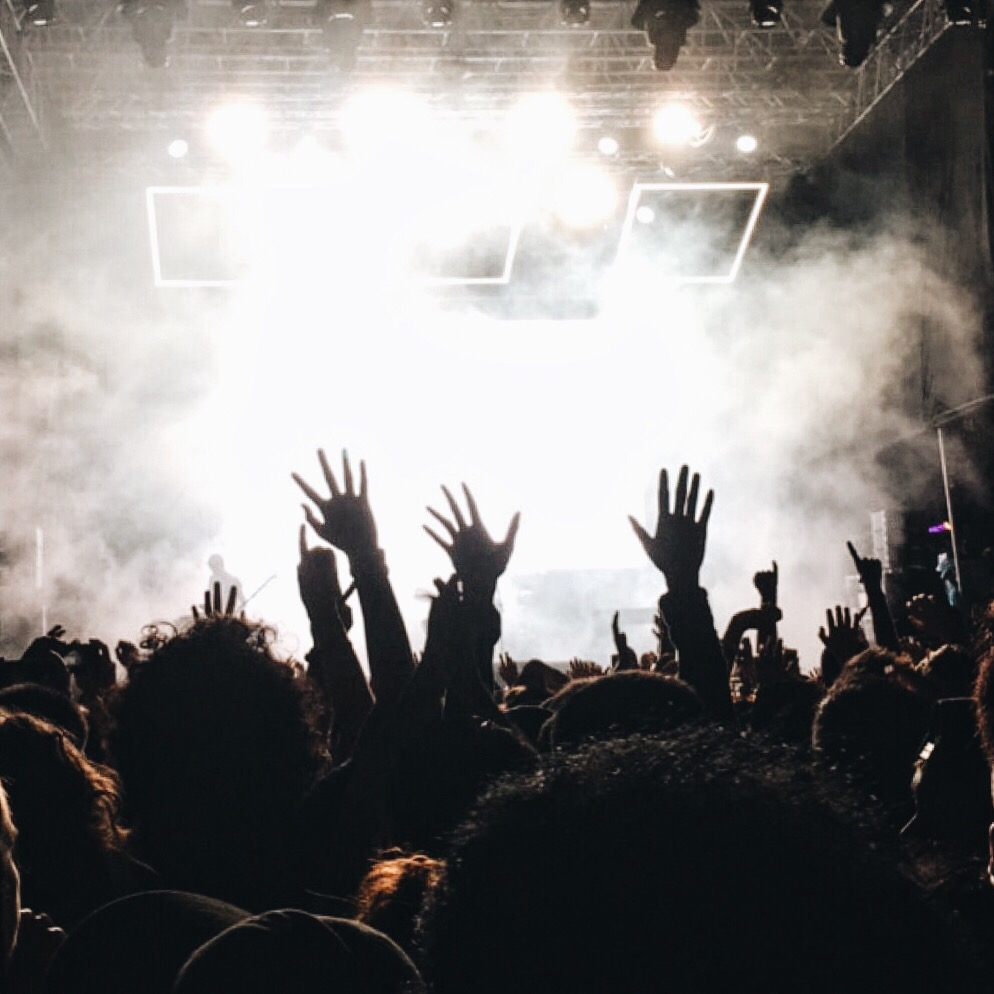 Beyond the music (though you can argue that should be the ONLY thing), attending Laneway is an experience I’ve never regretted. Which says a lot because my sunburnt skin has been peeling all throughout Chinese New Year. There’s something special about a live performance that transcends a Spotify premium account. You somehow get lost in the music. You forget about how you’re stuck in the downpour of 2015 or getting fried by the intense sun rays of 2016. You forget about how overpriced that hot dog was and you forget how you hate that bottle of cider for forcing you to confront the dreaded portable toilet. All you are aware of is how your rib cage is thumping along rhythmically to each syllable. The intense calm that only visits you when there’s madness. How everything comes together like some strangely choreographed flash mob to remind you how much life you still have in you.

Like all experiences, a trip to Laneway is what you make of it. No one is going to judge you on that day if you can’t sing along to every song or if you can’t be bothered to dig out a flower headband for the day. On a similar vein, no one can judge you if all you want to do is check out what people are wearing or watch drunkards make out at twilight. Everyone is there for their own reasons and honestly can’t be all that bothered to care about yours while fulfilling their own agenda.

This year, there was nearly twice the crowd and some as young as 14 and as old as 50 gracing the event (by my modest estimates and people watching habits). There was also a greater attempt to engage with the local music scene and diversification of the genres they’ve brought in. The latter is contestable but it wouldn’t be wrong to say that there’s really something for everyone at Laneway. 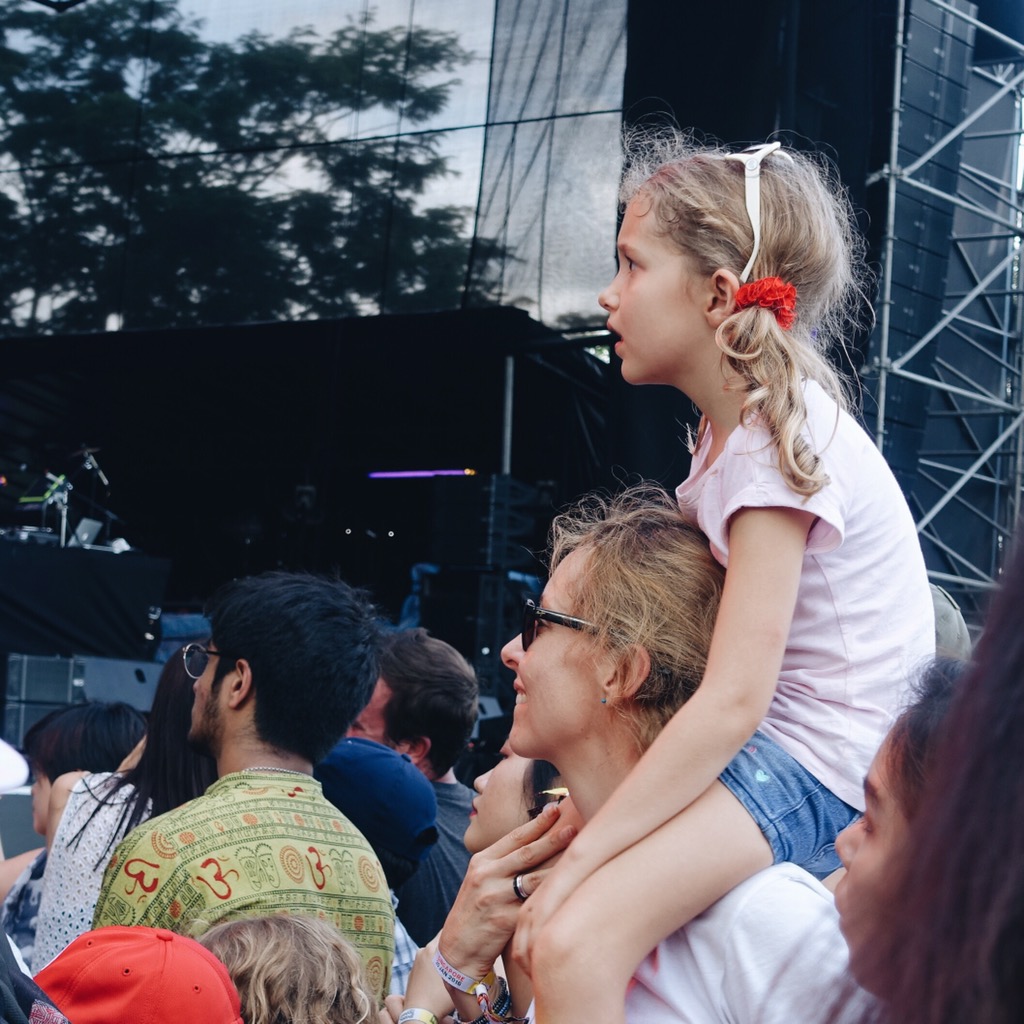 Maybe I’m just a doe eyed noob with a Throwback Thursday waiting in the wings when school life is reduced to the slow hum of my lounge’s ceiling fan. What would I know about Laneway when I’ve only been for it twice? I guess if there’s anything that I want you to take away from this article dear reader, beyond common sense to wear sunscreen, the only thing you need to prepare is an open heart and mind for your own Laneway story.

This article is co-authored by Isaac Neo and Sarah Chew.

Isaac is a Year 1 FASS student, intending to major in Political Science. He wants to explore and understand the world, but is content with just surviving in university for now. He loves the works of Haruki Murakami, and finds the magical realism in everyday life.

Sarah is a professional shower singer with a fondness for things that are monochrome – especially pandas. She enjoys acoustic music and suffers from food comas more often than preferred.