What do spaces mean to us?

“Spaces become reminders of many, many things: people that you’ve been with, experiences that you’ve had, who you used to be – that’s more important than the actual construction, the architecture, of a space.”

Spaces are places we inhabit, yet so often we take them for granted. Laden with meaning, we imbue spaces with personal hopes, memories, and visions as we begin to spend more time in them. I had the privilege of hosting a panel during Recess Week about the topic, with my panellists, Pavan Mano, Helen Dominic, Navin Wadhwani and Isaac Neo.

The discussion began with a theoretical bent, considering what spaces meant to us, and the importance of the constraints imposed on a space. We looked at the duality of borders and how they defined a space as they confined it. There were also the standard points raised about the gentrification of Singapore, the destruction of green spaces, and the unyielding sense of competition for space in the tiny island-state.

Yet, this did not cut to the meat of what spaces meant to us. As the night progressed, the topics took a more personal flavour. When asked about re-envisioning Tembusu, Helen remarked, “I think it’s hard to re-envision a space that’s already riddled with so much tradition and meaning,” before reflecting on how spaces take the shape of what they’re used for.

“I was thinking about labelling. We call it a lounge but people use it for studying, and socialising. And so, a new meaning is imposed, when, say, someone plays Defence of the Ancients (DotA), and then they bring in a group of five people… It just becomes a ‘DotA lounge.’” 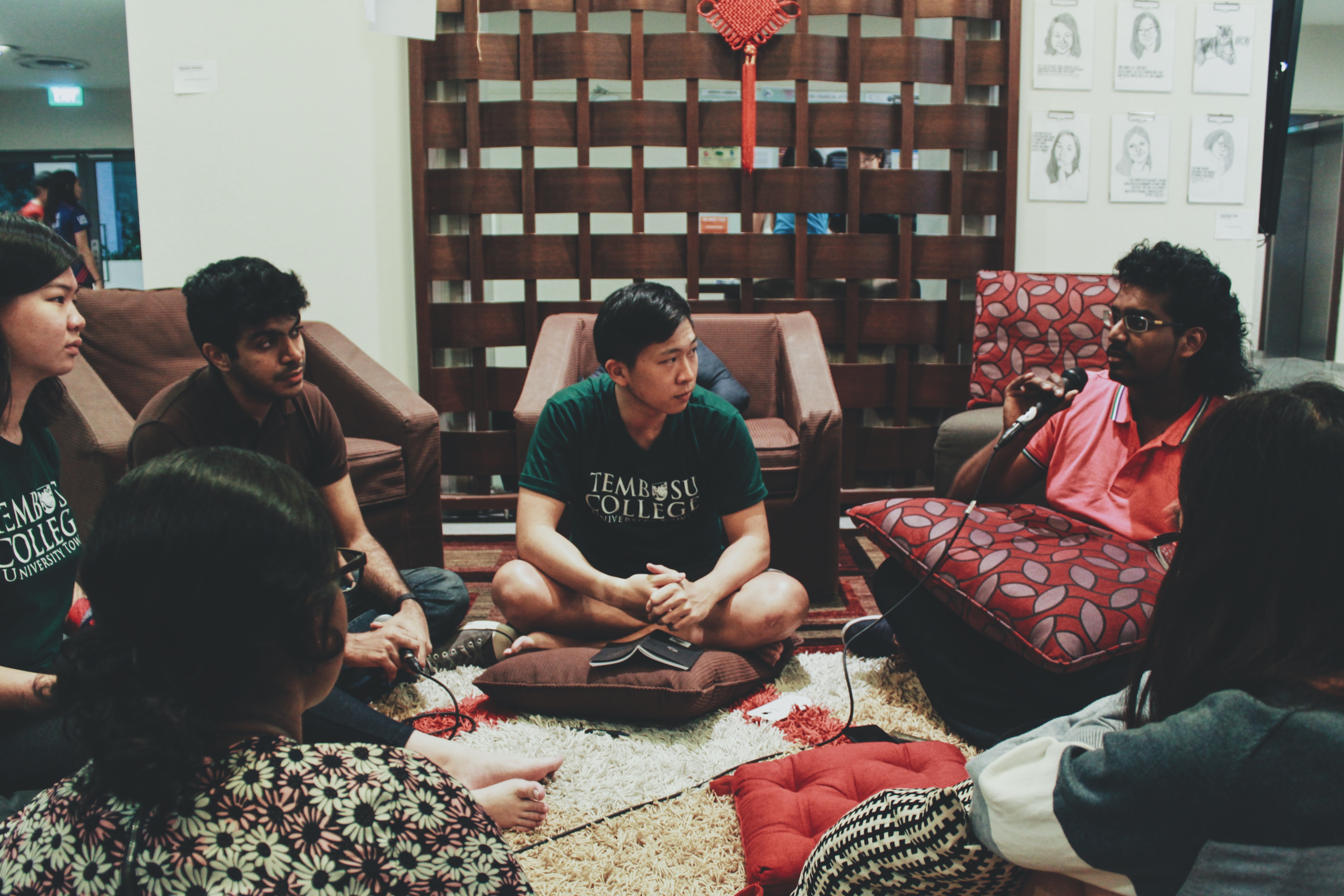 The speakers at the panel discussion during the Treehouse & tStudios Showcase Week, in the temporarily re-configured lobby space.

“So, it’s re-imagined. The space is re-imagined constantly, by different people, but me trying to re-imagine it is probably not possible. It’s very difficult to do that because there’s already a meaning that it has, beyond something that I can express.”

The names of spaces could also be encumbering, because names define a place and give a space an intended utility. Pavan remarked, “most of the spaces here are named. So the purpose is also set up. We have our seminar rooms, we have the dining hall, we have the office, so how much imagination do you need to figure out what to do in these spaces? It’s very, very difficult to recreate a space.”

Names could also prove baffling. For instance, did you know that the Atlas was formerly known as the Intersection? Originally intended to house start-ups and business discussions, it is better known as the place where alumni and Filmbusu gather. Still, given its name, the Atlas, there remains a layer of incongruence between its imagined purpose and its actual usage, evoking a sense of adventure and travel that has not been fulfilled.

Despite the difficulty in re-imagining a space, a good deal of re-imagination does take place. After all, Tembusu itself is but a happy coincidence of brick and concrete, built on a golf course. We may not feel an affinity to its physical structure, but we have to imagine and cultivate our community. We do this by creating interest groups, having conversations in the dining hall, and forming good memories in the corridor. While the physical building gives us structure and space to form these ties, we have to make our own community, a curious amalgam of different elements, but ultimately a vision for unalloyed possibilities. Even then, this community is constantly re-imagined with every new cohort of students. 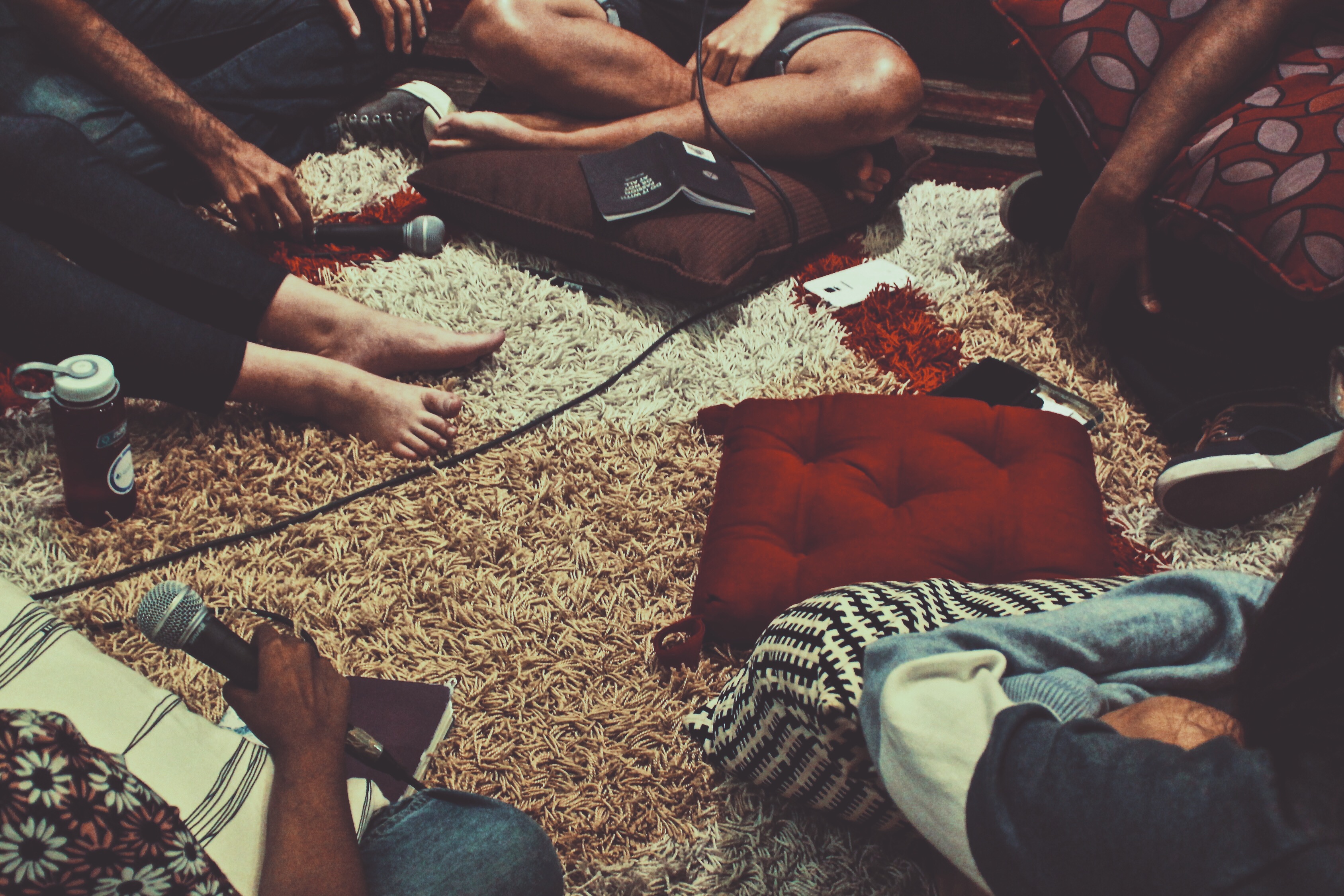 By hosting this panel, I learnt that while the term ‘space’ evokes images of architecture, geography and urban planning, the emotional aspects of space and the meanings we create in them are equally important. How we engage in these spaces, by disrupting them or appropriating them, shapes the space as much as they shape our inner topographies. I came to the panel, armed with abstract questions, but left with a much more grounded sense of what spaces meant to us.

Spaces are inextricably bound to the stories we tell about them – these are articulated in names, memories, and how they’re used. We can view them as mere areas, but this would ignore how we interact with them, as human beings co-creating narratives about a place. Perhaps a space is not just a place, but a means by which we become human.

Erica enjoys animated films, comedies and podcasts about humanism. In her spare time, she can be found listening to Zayn Malik’s music.