In April of this year, Tembusu’s Slate staged a production of Tan Tarn How’s The Lady of Soul and Her Ultimate ‘S’ Machine. The play is still seen as provocative, even 26 years after its initial release.

The play follows the travails of Derek, a beleaguered civil servant who still has dreams of bettering the system from within. He embarks on a quest to find the “soul” of the unnamed setting, only to be met with committees upon sub-committees and outlandish proposals. For instance, one of the participants proposes a cultural centre within a brothel, more crudely put as “an art-house within [a] tart-house”.

Ultimately, Derek fails to find the soul of the city, and is crushed by the learned helplessness engendered by the system and its bureaucracy. The play was a sobering look at how political change is often non-linear and not guaranteed, despite the well-intentioned efforts of people in a society.

Watch a video recording of Slate’s performance at this link. (Credit: Jarratt Ong )

Shirin Keshvani, one of the directors of the production, shares, “I honestly didn’t know if it was going to translate, if the audience was going to get it.” Political plays, she says, are not her favourites, personally preferring slice-of-life stories with a more human element.

Initially, Slate had decided on staging Haresh Sharma’s Those Who Can’t, Teach, which focuses on the harrowing lives of teachers and students in a Singaporean secondary school. Slate could not obtain the performance rights to the play, however, so they eventually settled on The Lady of Soul and Her Ultimate ‘S’ Machine. One of the members had a collection of Tan Tarn How’s plays, and it seemed like a natural fit.

“We previously did this for a dramatised reading during Arts Week,” stage manager Wong Jean says. Shirin adds, “I think as we were rehearsing, we realised that it’s a very political play, and that [element] would engage Tembusians the most.”

Besides being pushed out of her comfort zone artistically, Shirin also challenged herself by directing for the first time. Understandably, this elicited something of a panic. “Before this, I was very, very like… Uh, afraid of directing. I’m an actor, not a director!” she exclaims. It was also difficult, she adds, having to direct while acting in the play herself.

Ella Wee, the other director of the play, chimes in, saying, “Yeah, I’m actually a physical theatre kind of person, who like, crawls on stage and does weird stuff. And I don’t like directing.”

Still, while both of them felt out of their depth in the making of the production, they found solace in teamwork. “It just really helps when you remember that it’s a collaborative environment, and that people are forgiving. I think I prefer building with them, rather than coming in with my own [vision],” Shirin says.

In Slate, the name of the game is trying out new things, no experience necessary. “Some of [the cast] have never acted before, but all of them are pretty talented. Very hard-working,” Ella says.

“When they started memorising lines, I was like, guys, thank you so much for memorising…” Shirin adds. “There was this consensus that like, you know, we’re all going to do what’s best to make this play a good play.”

Cheryl Lim, one of the founders of Slate, also found herself exploring new roles during the production. “This was my first time working as a set designer, and I stepped in to fill an acting role when one of our original cast members dropped out a couple of weeks before the production date.” Yet, despite the busy schedule and tension that comes with being an Architecture student, Cheryl affirms, “Time after time, the sense of closure on show day makes up for it.”

The production also leveraged on the different skills of the talent. Contrary to popular belief, not everyone in Slate has to act – or wants to act!

Jean says, “I’m not that comfortable with acting, so I just want to see what area I can help out with. I’m just excited to see the direction that Slate goes in, especially since it’s such a young interest group.” Jean was the person making it work behind the scenes, co-ordinating the lighting, the stage managing, the blocking and the sets.

Yet, despite the doubts that the cast and crew had about their own abilities, the production was warmly received. 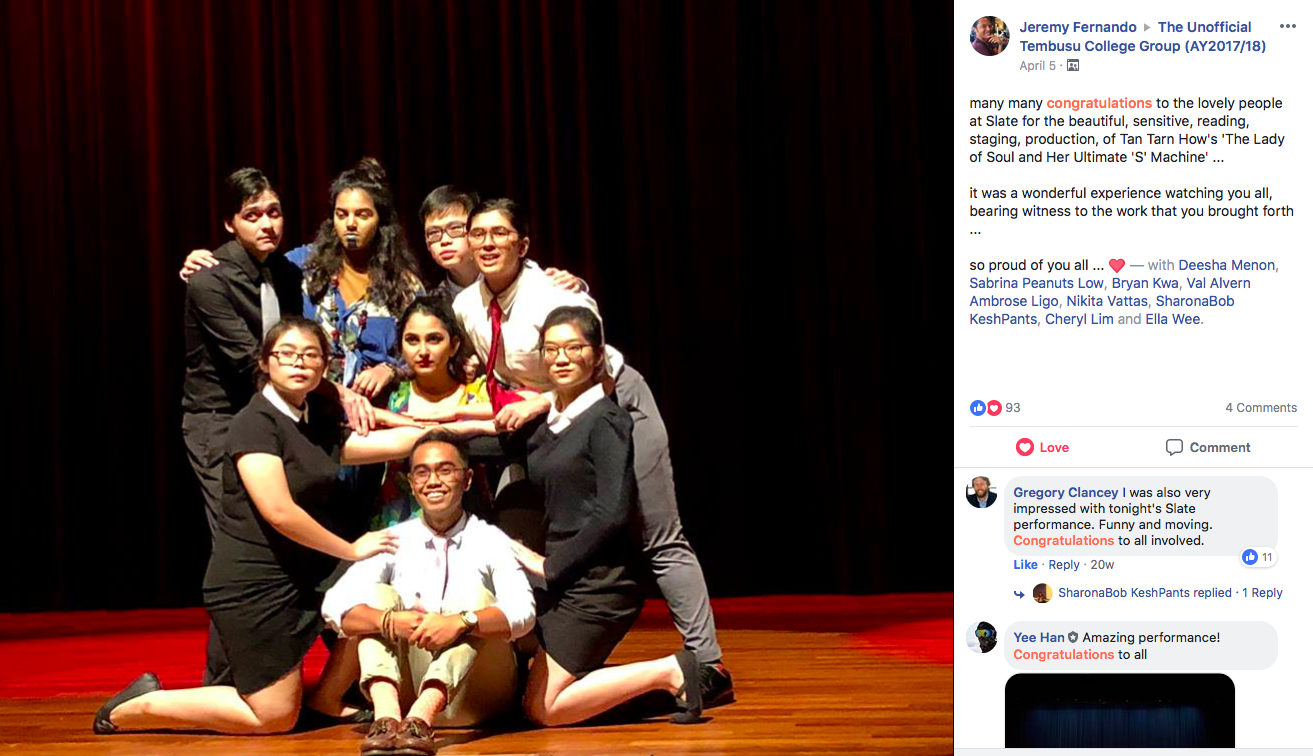 This marked Slate’s second successful production. Their previous effort Left was a thought experiment about being left-handed in a world where everyone else was right-handed. Written by Tembusu alumni, Pavan Mano, it was a treatise on how stifling expectations could be, even if they were well-meaning.

While The Lady of Soul and Her Ultimate ‘S’ Machine was more overtly political, it still followed Slate’s penchant of supporting local plays that are accessible for audiences of different backgrounds.

“We kick-started Slate back when I was in Year 1, with hopes of making theatre accessible and relatable to people who were interested in it. Having heard about how ‘niche’ and ‘exclusive’ the stage was, we wanted to remove these labels and open up a window,” Cheryl, now a fourth-year student, clarifies.

“Having laid the foundations prior, I think we’re starting to get a lot more adventurous in the ways we’re hoping to explore theatre!”

Well-said. Here’s hoping that Slate can be the answer to Tembusu’s own search for soul.

Erica enjoys animated films, comedies and podcasts about humanism. In her spare time, she can be found listening to Zayn Malik’s music.