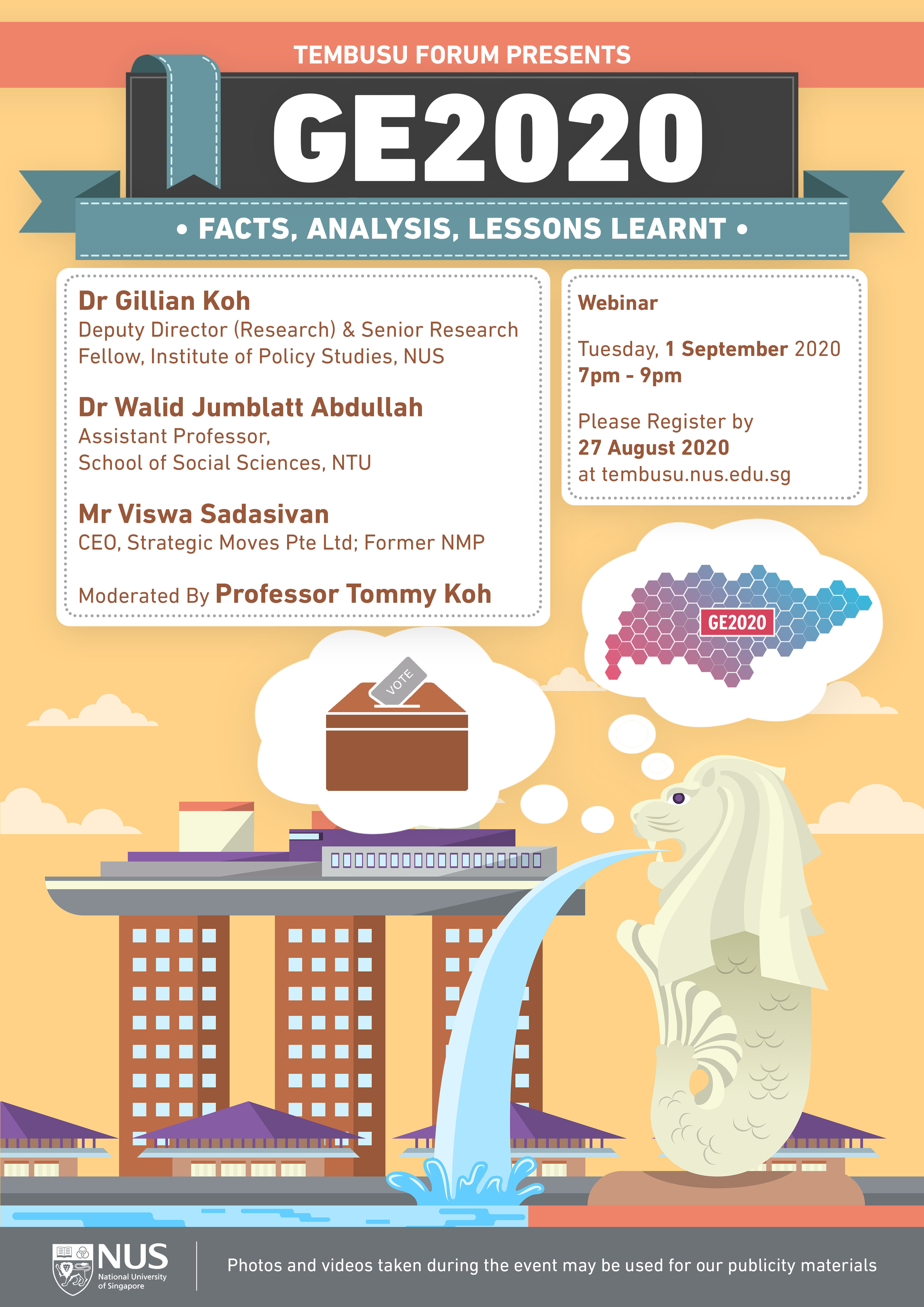 Dr Gillian Koh is Deputy Director (Research) at the Institute of Policy Studies (IPS) and Senior Research Fellow in the Governance and Economy Department. Her research interests are in the areas of party and electoral politics, the development of civil society, state-society relations, state governance and citizen engagement in Singapore. Among other things, Dr Koh conducts surveys on Singaporeans’ political attitudes, sense of identity, rootedness and resilience and also helmed several IPS scenario-planning projects. She was part of the team that conducts the IPS Post-Election Surveys. She has published and co-published articles on civil society and political development in Singapore. She was co-editor of Migration and Integration in Singapore: Policies and Practice (2015) as well as State-Society Relations in Singapore (2000) and Civil Society and the State in Singapore (2017) and co-author of Singapore Chronicles: Civil Society (2016).

For this forum, Dr Koh will seek to do three things to contribute to that discussion on Singapore’s political system. The first is to analyse the polling data of GE2020 – the swing in voter support for the parties, the margins of victory received by the fourth generation leaders of the ruling People’s Action Party for what they might suggest about political succession at the heart of government. The second is to examine three specific forms of electoral tactics employed by the parties to establish which party brought its A-game to GE2020. The third is to discuss the most critical set of issues that the election raised with long-term consequences for our democracy. These are areas where citizens as well as public intellectuals and legal scholars play important roles to ensure we build a healthy democratic society that goes beyond the question of competition in the system.

Dr Walid Jumblatt Abdullah received his PhD under a Joint Degree Program between National University of Singapore (NUS) and King's College, London. He works on state-Islam relations, and political parties and elections, with particular focus on Singapore and Malaysia. He has published articles in internationally peer-reviewed journals such as Democratization, International Political Science Review, Government and Opposition, Australian Journal of International Affairs, Asian Survey, Small Wars & Insurgencies, Journal of Church and State, among others. He recently started an Instagram Live series, featuring informal yet serious chats with politicians from various political parties, called Teh Tarik with Walid. He hopes to help reduce political apathy and increase political awareness among younger people through this series.

For the forum, Dr Walid will talk about the road ahead for Singapore politics. Specifically, three themes will be discussed: 1. The future of the 4G leadership. 2. Race in politics: the continued relevance or otherwise of the GRCs. 3. The type of politics Singaporeans want, as shown from GE 2020.

Mr Viswa Sadasivan with over 30 years of experience in media and public policy analysis, has served on the boards of several government agencies including the Media Development Authority and SPRING Singapore. He also served on various national committees, such as the Singapore 21 Committee and the Economic Review Committee. For a decade, he was chairman of the political division of the Feedback Unit of the government. He served in the Singapore Armed Forces (SAF) as a National Serviceman for 41 years. Holding the rank of Colonel, his last held position was Deputy Director, Joint Operations.

Viswa started his career in broadcasting in 1983 and made a name for himself as an award-winning documentary producer, and anchor of top TV current affairs programmes of the late 1980s and early 1990s – Feedback and Talking Point. Known for his independent thinking and incisive style, Viswa is a sought-after speaker and facilitator. He has interviewed several leaders including the late Mr Lee Kuan Yew, Tun Dr Mahathir Mohamad and more recently President Barack Obama. He has moderated over 300 policy forums in Singapore and globally, including UNESCO’s inaugural Conference for Persons with Disabilities, and the St Gallen Symposium in Switzerland and in Singapore. In August 2011, Viswa gained accolades for his skilful moderation of a robust 2-hour online debate among the 4 candidates in the Singapore Presidential Election. In 2015, he chaired a 3-hour ground-breaking spontaneous debate among the representatives of the 10 political parties contesting in the General Election.

As founder and CEO of Strategic Moves — a corporate strategy consulting practice — Viswa has trained and provided counsel to more than 10,000 public and private sector leaders in Singapore and the region in corporate strategy, policy engagement, crisis leadership and innovation. Given his deep knowledge of and experience in public policy, business strategy, media and conflict resolution, Viswa has been engaged by several public and private sector organisations in Singapore and the region to achieve their strategic goals. For example, over a 15-month period as strategic advisor, he helped the Las Vegas Sands Corp win the bid to operate an Integrated Resort (Marina Bay Sands) in Singapore – a $6.5 billion project.

An accredited mediator for more than 20 years, he is a board member of the Singapore International Mediation Centre (SIMC).

Viswa is also the founder and Editor-in-Chief of IQ [Inconvenient Questions], a video-based socio-political online site that aimed to be the conduit for honest engagement between stakeholders and the government. During its 16-month lifespan in 2015/16, IQ helped raise the bar for quality online discourse through reasoned analysis. It tackled hot-button issues — from freedom of speech to race relations — over 22 lively, no-holds-barred discussions featuring a studio audience and expert panellists. In June 2020, Viswa revived IQ because of popular demand – this time in collaboration with the National University of Singapore Society (NUSS). It has gained a strong following, especially during the 2020 General Election.

Viswa holds a Master in Public Administration degree from the Kennedy School of Government and Administration, Harvard University, where he topped his class in Negotiation and Conflict Resolution.

For the forum, Mr Sadasivan will speak on three possible longer-term outcomes of GE 2020. First, the WP rides on the momentum of GE 2020 and wins more than one-third of all seats in Parliament in the next GE. Second, the PAP becomes a kinder, fairer party and this results in a vote swing in its favour. The third is my ideal scenario for Singapore – a combination of the first two scenarios.

Recording of the forum can be found here: https://youtu.be/rQtAc2wsx6U