On Walking with My Teacher — Ink, Walking, Calamari 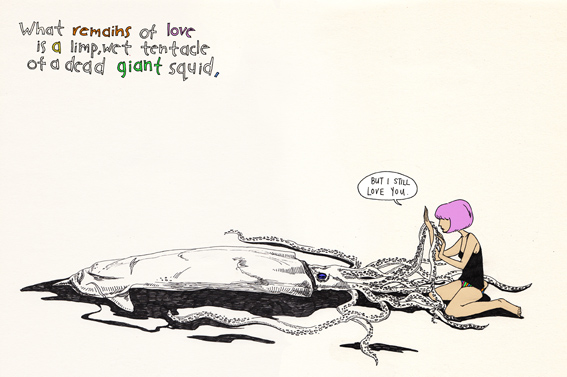 This talk attempts to open the relationality between walking and thinking — movement and thought — through the all too familiar situation, scenario, of writer’s block. Starting with the scene of a walk with my teacher, Avital Ronell, in the woods of Saas Fee, Switzerland, the dossier of the teacher, the pedagogue, as a guide (agogos) is opened, alongside the question what is it to teach, what is it to be a teacher. Which, if Martin Heidegger is to be believed, involves “learning to let … learn” — opening the space for learning, for thought; inspiring another to learn, as it were. However, once the register of inspiration is opened, there is always already the possibility that it is — along with both the one who is inspiring and the one who is inspired, who perhaps are — infected with the whispers of the daemon. And at that juncture, pedagogy and paedophilia, the pedagogue and the paedophile, are perhaps not quite so distinguishable. Which is not to say that they are exactly the same: far from it. But, it is also suggests that one cannot quite immunise oneself from this potential danger: for, without the possibility of love, without opening oneself to another — to the dissemination, perhaps even insemination, of an idea, notion, thought — there is also no learning.

Which still doesn’t quite respond to the problems of a lack of movement in writing, of the point when the proverbial ink stops flowing. To what happens when there is a block. And perhaps even the irony of writing about writer’s block: for, it can only be written about retrospectively, when it is cleared, when there is clearance, when the path is already crossed. Which suggests that all writing about it is an act of memory: one that is unable to account for the possibility of forgetting — and thus also fictionality — brought with, within, it. Thus, one might well be writing about everything except writer’s block itself.

Perhaps then, one can write, say, nothing about the moment in which one’s writing is blocked — at best, one can only describe it, testify to it, inscribe it in, through, literature. Through another act of writing, of writing again: but, not one that attempts to know, define, be definitive, but an imaginative one; one that perhaps always already erases itself whilst inscribing, through its inscription.